OFTP is the protocol for EDI data exchange in automotive industry

OFTP2 is the further development of the known OFTP communication standards, which was developed from the Odette organization (a merger of various national automobile associations) among others for the EDI data exchange in the automotive and logistics industry . Therefore the Odette File Transfer Protocol (OFTP) is found most frequently at automotive manufacturers and their suppliers again. The protocol was deliberately adapted to the demands of the industry and since then has been considered as the standard protocol.

Advantages of OFTP compared to other transport protocols such as FTP are that it resumes broken connections. This fact is especially important for large data transfers (e.g. engineering data as large CADs) and slower line speeds for ISDN connections. Thus failed transmissions only had to be continued, but not had to be started all over again. Moreover OFTP offers the opportunity to acknowledge the transmissions. For this end messages (end-to-end response) are contained in the Protocol called EERP.

The first version of the OFTP standard (RFC-2204) was published in the 1986th. At this time, the transmission occured over X.25 and ISDN "state-of-the-art". At that time the Internet was still in its infancy. A file transfer of OFTP on the Internet was not feasible at this time. Therefore, the exchange of EDI data took place mostly via ISDN. Also introduced in version 1.3 of the Protocol Supplementary to the ability files over TCP / IP - so on the Internet to send - did not alter this fact. The already established communication paths over X.25 and ISDN remained for the time continued to exist.

With the global spread of the Internet and the development of other communication standards as well as the growth of the volumes of data and sizes the transmission OFTP via ISDN was gradually no longer optimal. The possibility of the Internet as alternative transport to ISDN to use was always attractive. Because the use of ISDN for intensive OFTP users became more expensive copared to the use of the Internet. For the use of ISDN as a transmission channel you need special ISDN hardware (a router or an ISDN card) and an ISDN connection. In addition to these costs but also the transfer costs (telephone charges) for sending and receiving files were a distinct disadvantage of this transmission path. As some users changed their systems from ISDN to TCP/IP because of these reasons, the OFTP standard in 2007 version 2 (OFTP2) was developed.

Written down: The announcement by the Telekom Discontinuation of ISDN lines to the end of 2018 now brings the final users of OFTP via ISDN in distress. A switch to OFTP2 or other communication standards such as AS2 until the end of 2018 is necessary for companies, which do EDI data exchange.

OFTP2 is since its introduction the new standard for the exchange of EDI data within the value chain in the automotive industry. The specified (in RFC5024) standard amends the previous version 1.3 with important security features. Since the transfer of data from now primarily is done over the Internet and dramatically data security in the EDI communication became more importan, the OFTP standard became necessary in the version OFTP2 to adapt to these requirements. The authenticity and integrity of the sender and recipient should be ensured. To ensure this offering OFTP2 security features include secure file transfer with TLS / SSL, file encryption and file-signing. 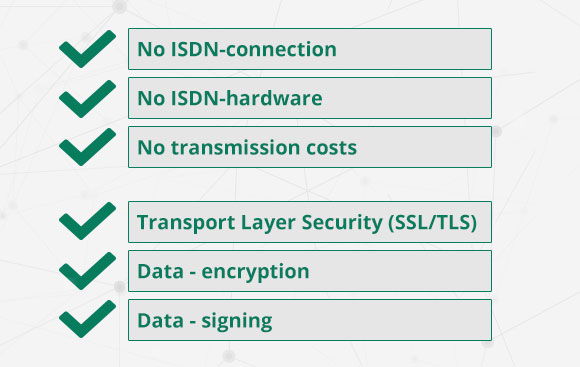 Compared to the use of OFTP standards in version 1 you will not longer need special hardware when you use OFTP2 , such as an ISDN router / card and an ISDN connection. You do not pay more for each carried ISDN connection. The OFTP2 connection is established solely on the Internet, so you do not accrue additional costs for the transmission path.

With the i‑effect® * OFTP2 module for IBM i you can transfer any files (for example, CAD, EDIFACT, or similar) by using the OFTP2 standards with your partners. You save time and costs by using OFTP2 through the complete conversion of OFTP 1 with ISDN to IP based communication. In addition, you improve data security in your company by using the new standards.

EDI communication (the shipping and receiving of EDI data) forms in most workflows of companies, that operate the electronic data exchange, only the interface to the partners. Within the company, the received data must be usually further processed. Here, for example, EDI converter or automation mechanisms are used. The combination of all areas is named EDI system or software.

Our EDI software i‑effect® - a software specifically for the IBM operating system - does precisely this subtasks of electronic data interchange from a single source. This also results in the advantage of the module *OFTP2: The seamless transition to our other modules allow you a wide variety of applications.